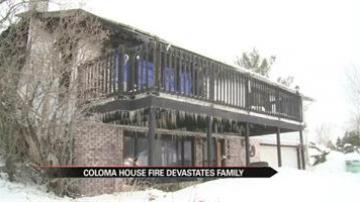 COLOMA, Mich. -- A family in Coloma lost most of their belongings and a beloved pet in a house fire Sunday morning. It took four fire departments three and a half hours to put out.

"It was just black smoke everywhere and it was so hot, just really, really hot," said Lori Romeo, daughter of the homeowners.

"When I opened the door, there was just black smoke as far as you could see and I started screaming for my mom to call 911," said Mikayla Romeo, granddaughter of the homeowners.

Eugene Tutton left his home on Becht Road around 11 a.m. Sunday to pick up his wife from church.

When they returned, they found the house they had built together nearly 50 years ago up in flames.

"When they got there they found their daughter and granddaughter screaming and waving them down in the front yard," said North Berrien Fire Chief Bob Ruff.

The couple's daughter and grandchildren live right next door.

When they saw all of the black smoke, they feared the worst.

"My first thought was my parents, they're in their upper 70s and I'm thinking that they were in the chair and I didn't see either one of them in the chair," said Lori.

On Monday, they showed us what was left of the home.

"This all melted and you can see all of the debris in here," said Lori. "They've lived here for 45 years, like I said this was my childhood home and it's just very devastating."

"We believe, based on our investigation yesterday, that the point of origin is the upper level back of the house near the meter panel," said Ruff.

This was the second major house fire in one week in Berrien County.

Lori says her parents' story is proof it can happen to anyone at any time.

"I think they are in total shock, as are we. It's just shocking. And I know there have been other fires and it's just scary," said Lori.

Lori says the family was able to salvage some pictures and keepsakes, but almost everything is gone - including her father's beloved dog Lily.

Firefighters are still trying to determine the cause of the fire.