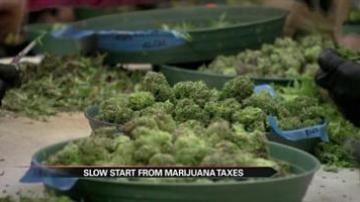 Officials are finding out that marijuana may not be as profitable as first thought.

It has been three-months since pot was legalized in Colorado and experts are saying the state may not raise as much in taxes as it hoped.

More than $3-million was raised in January and February from special sales taxes on recreational marijuana.

A slow start to get the $23-million the state was expecting by July.