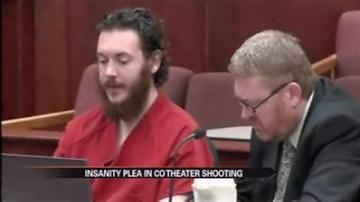 CENTENNIAL, Colo. -- The man accused of opening fire in a Colorado theater has pleaded not guilty by reason of insanity.

James Holmes will go to a Colorado state hospital for a mental evaluation.

The judge also ruled prosecutors can read the notebook Holmes sent to his psychiatrist before the shooting.

Meanwhile, the defense wants jurors to be sequestered from electronics during the impending trial which could last four months.

Survivors and victims' families say they are just ready for closure.

"If it takes years down the line where I have you keep coming back to court so I can be able to get some closure for myself so I can move on, I’ll come every week if I have to," said Josh Knowlan, Aurora shooting victim.

Twelve people were killed during a midnight screening of "The Dark Knight Rises" last July and 70 more were hurt.