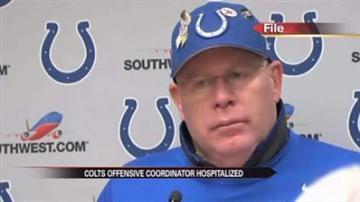 INDIANAPOLIS — One and done. That is how the Indianapolis Colts could describe their post season, just one year after having the worst record in the NFL.

On Sunday, the Baltimore Ravens knocked the Indianapolis Colts out of the post season. The Ravens defeated the Colts 24 to 9.

But before the game on Sunday, medics rushed offensive coorindator Bruce Arians to the hospital for an unspecfied illness. Arians filled in for head coach Chuck Pagano for 12 weeks.

Pagano recently returned to the Colts after being treated for leukemia.