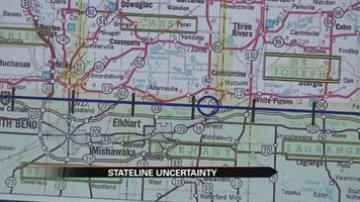 It has been nearly 200 years since the Indiana-Michigan border has been surveyed, so a special commission is tasked with figuring out exactly where that line falls.

The people working on the project estimate the boundary lines could be off anywhere from a couple inches or a couple feet, but they won't really know until they start work.

Because there have been disputes between neighbors, John McNamara and other county surveyors are hoping to put the issue to rest.

McNamara and nine other people have been selected to serve on the Indiana-Michigan Boundary Line Commission. They will be tasked with retracing a survey performed in the early 1800s.

A lot has changed since then and experts want to make sure property lines between the two states are accurate."

It may not seem like much, but along the shoreline of Lake Michigan, it has an impact on property values and where private beaches meet public ones.

The group will start at the lakeshore and slowly move west over the next few years.

Homeowners concerned about paying property taxes in both states need not worry. Surveyors say the difference will be minimal.

"It's not going to be a big adjustment, but it's going to be once and for all - we're going to have it done," said McNamara.

They have to survey 105 miles and the chairman of the commission says the project will be broken up into 20-mile sections.