Common Council fights back against GPA change for local athletes 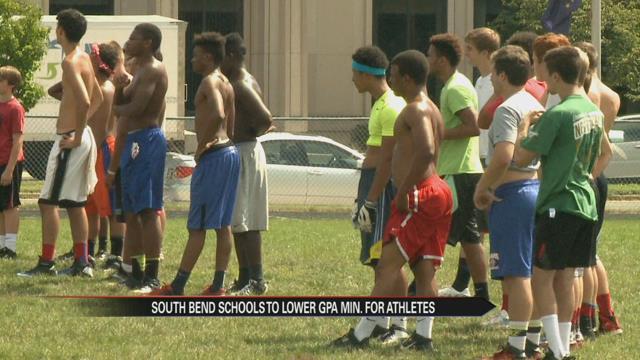 The South Bend School Board is considering lowering the grade point average requirement for athletes. Some members of the common council don't agree with the change.

“These kids right here are spending two and a half hours a day after school in athletics," said Craig Redman, Head Football Coach at John Adams.

Some members of the South Bend Common Council oppose the school board’s decision to lower the GPA requirements of athletes.

Valerie Schey, one of the South Bend Common Council members opposing the GPA change says the school board is sending the wrong message.

“A ‘D.’ If you can just skate by that's good enough. We would hope to inspire people to be more than just average or to achieve basic minimum requirements in life," said Schey.

And that’s why the South Bend Common Council has written a resolution that will be heard at Monday’s meeting.

“To encourage the school board to reconsider the position that they are taking which in my opinion is lowering the standards for our public schools," said Schey.

But Redman says the current system is not helping kids succeed either.

“If you've got A's and B’s and you're failing geometry class because you really just don't get it that brings you down to possibly under 2.0.”

And he believes that this lower GPA requirement could help more kids get off the streets and on to the field.

“The biggest thing that we've got right now for ‘at risk kids’ in South Bend is athletics.”

“I have heard that it's a way to try to keep the kids from dropping out but, you know, they are called extra curriculars activities because they're supposed to be in addition to the curriculum," Schey said.