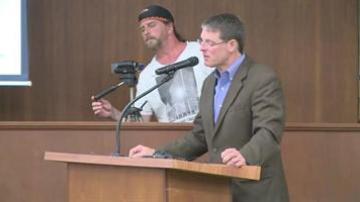 SOUTH BEND, Ind. -- There were two hot topics at the South Bend Common Council meeting Monday night. It was the first council meeting since Henry Davis Jr was arrested and announced he's taking a medical leave of absence. The other big topic was the St. Joseph County dispatch consolidation proposal.

Henry Davis Junior announced earlier on Monday that he was taking a medical leave of absence.

Davis was arrested for two counts of operating a motor vehicle while intoxicated, both misdemeanors.

“How long is the council going to keep up with a person like Henry Davis Junior? He’s not fit to be sitting up in that chair right there. It’s time for the council to act,” said Sal Gerschoffer.

“Things are spiraling and getting worse. That makes it harder for you guys to do your job. It makes it very sad for him and his life and the pressure that he’s under,” said another concerned woman.

The big topic of discussion was the St. Joseph County dispatch consolidation project.

The plan is to consolidate the current four centers to just one center, with another site as a backup.

However some South Bend Police officers don’t think consolidating to just one site is in the best interest of public safety.

The new site will be 17 minutes away from its back up location.

Deputy Mayor Mark Neal looks at it as a city benefit.

“There is a benefit to the city, in looking at this combined center that we do expect to have cost savings,” Neal said.

Police also said that the county is seeing budget cuts, hiring freezes, and giving few raises. So they wonder if this is really the best time to build a $9 million facility.