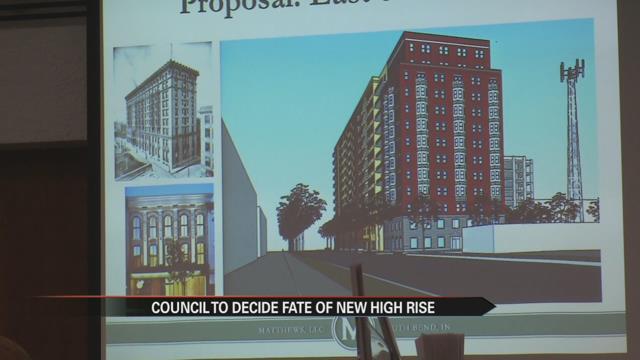 One South Bend developer is hitting the first road block in his Regional Cities venture.

Original plans for the East Bank neighborhood put a hold on the future of a high rise going in the Commerce Center.

After much back and forth, The Area Plan Commission decided Tuesday to let the city’s Common Council decide on the fate of the project.

“Let the city council decide, they’re the elected officials they have better mechanisms to call for public input and make sure this is the right move for the neighborhood, for the city,” said Developer Dave Matthews.

“I hope that you will find this in your heart to give this a favorable recommendation,” said resident Samuel Brown.

There was an outpouring of support for Matthews and clear interest in his development he wants to build in the East Bank.

Some pointed out a big reason behind the interest.

“There’s a lack of available apartments for people to move into,” said one resident.

But the proposed mixed residential and commercial building would stand too tall.

“The height of the building despite all the other good points of the project, in our view, really compromise the intent of the East Bank plan,” said Larry Magliozzi, an Area Plan Commissioner.

At 175 feet, this project would be the third tallest building in the city.

The commission says residents living in The Pointe apartments would get less sunlight during because of those overcasting shadows.

Points taken by the developer, but he’s hoping resolution will come soon.

“To keep moving forward, i think it’s fair for the city council to make the call saying ‘hey is this height OK?’” said Matthews.

Matthews has 4 years to complete this project or else the state can take back the $4.9 million Regional Cities Grant he was awarded.

The proposal was sent to the full common council without a recommendation.