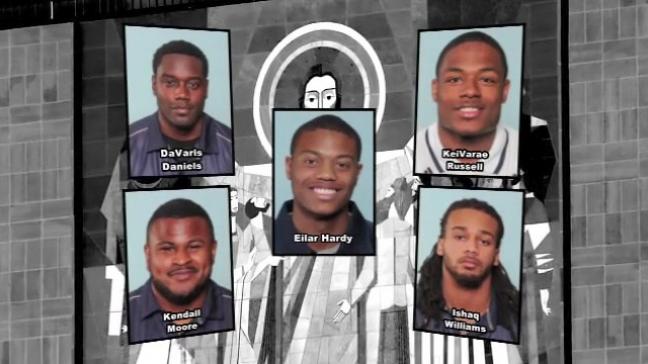 Keivarae Russell, Ishaq Williams, DaVaris Daniels, Kendall Moore, and Eilar Hardy will have their hearings by Friday regarding the academic fraud investigation.

Head Coach Brian Kelly said the communication with officials who are handling the investigation has been scarce.

Kelly said, “I think my wife asked me, she did. And I really don't know. I have no idea what the process is other than what a couple of the players informed me of."

According to an article posted by espn.com on Friday, DaVaris Daniels said he feels the lack of communication and lengthy probe has been unfair. He is the first player to break his silence, and Daniels told ESPN he feels like a villain in South Bend.

Coach Kelly said in his press conference on Tuesday that he hasn't been made aware of any updates regarding the investigation.

“I have no knowledge of when a decision will be levied, how that will take place, whether the players are informed through an email or through a letter, I just don't have any of that information," said Kelly.

If a decision comes down on Friday and the players are cleared to play, Coach Kelly said he is willing to suit them up for the Stanford game on Saturday.

"If it's Friday night, that is certainly going to make it very difficult. If it's tonight, certainly that would increase the odds. But I would still stand behind that comment provided that there is at least some time to learn the game plan," said Kelly.

Notre Dame is ranked top ten in the polls, and Coach Kelly said it appears that this investigation is not affecting the other players.

Stay with ABC57 for a possible announcement from Notre Dame on Friday.