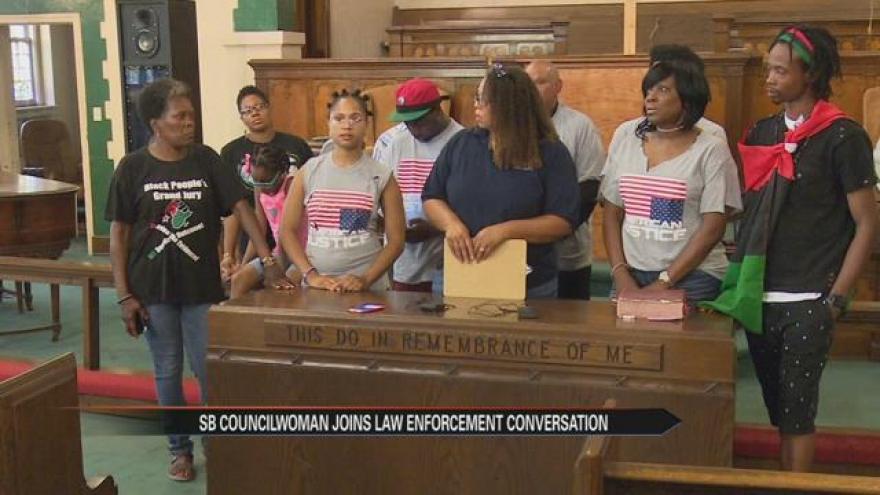 The calls for justice continue to grow louder in South Bend.

Now, a member of South Bend’s common council has also stepped up, demanding answers and accountability.

“I’m not standing up honestly, because I’m a public official, I’m standing up because I’m a citizen in this community and I believe we have each have the courage and say, ‘no we’re going to do something different this is just out of the box’,” said Regina Williams-Preston, second district common councilwoman.

She stood with a group of community leaders and called for justice for the Franklin Family during a press conference at the Doulos Chapel, Wednesday evening.

“We can support the police, many have said over and over again this is not about hating cops,” said Preston.

What it is about, to these folks, is improving the quality of life for all residents by holding cops accountable.

Residents and community activists voiced these concerns to the city’s board of public safety.

“This is not about skin color, this is about justice,” one resident told the board.

Several folks confronted the board about the employment of Officer Aaron Knepper at the center of several complaints.

One complaint was made by the Franklin family.

A court found the their rights were violated by officer Knepper.

They were awarded $18 in the judgment.

Although the board wasn’t talking about him, others were, including the South Bend’s Fraternal Order of Police, Lodge #36.

The organization weighed in through a Facebook saying in part:

“Officers should be afforded the same as any other citizen. When an officer is disciplined the matter should be closed.”

Now, the community will continue to press the issue, they say, until something is done.

“It’s not about harm or hate, it’s about making a real change in this community and the only way to start with change is to tell the truth,” said Preston.

Preston hopes to continue this conversation with other elected officials.

The city’s common council will hold a community relations committee meeting Thursday at 5:30 on the fourth floor of the County City Building.