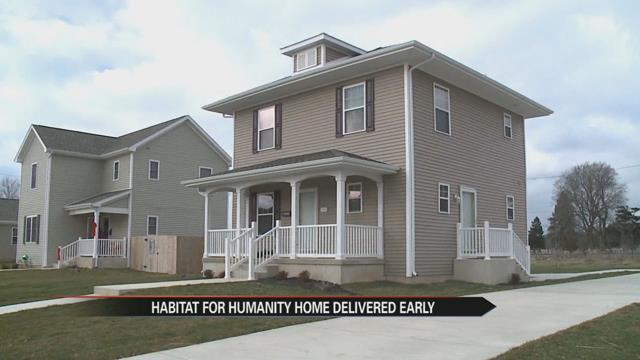 It may not be Christmas just yet, but one Mishawaka family is already celebrating the best present they’ve ever received – a new home.

“We actually built it with our hands and sweat,” Mishawaka resident Angel Franklin said.

Franklin and her family moved into their home on W. Marion St. in Mishawaka last week.

“I felt like I was at home the first night,” Franklin said.

The mother of two recently finished building their Mishawaka home with Habitat for Humanity.

“The best investment I ever made,” Franklin said.

Franklin moved to Mishawaka from Gary, IN about two years ago for a new job and better schools for her two sons.

“When I moved here, I saw that they had an introduction to Habitat [meeting] at the library,” Franklin said. “So I took a chance and went.”

After six months of weekly classes and a summer spent actually building her home by hand with her sons and dozens of volunteers, the Franklin family officially moved in last week.

“I think [building the home] made us more grateful,” Franklin said. “It was more humbling.”

But were it not for the new owners of Chase Tower in South Bend, Franklin would not be in her house for Christmas.

All the old hotel furniture needed to be cleared out of the tower, so the owners had their managing firm – the Bradley Company – donate the furniture to local charities, including Habitat for Humanity.

“They were able to bring moving trucks to take the furnishings out, put it in their Restore store, sell it fairly quickly, and utilize that money to help put a family in a home prior to the Christmas holidays,” Bradley Company COO Mark Neal said.

And thanks to those donations, the Franklins’ scheduled move-in for the spring of 2016 came early.

The Franklins’ new home features everything a family of three could ask for, including some hidden bonuses.

Down in the basement, there are a number of wooden beams still visible that are filled with signatures and messages from the dozens of people who came together with the Franklin family to build the house.

“They just care to see you do better,” Franklin said. “And I think that’s amazing. That changed me.”

Franklin is also interested in educating people about the Habitat for Humanity process.

She took six months of classes – a three-hour class each week – to become eligible for the Habitat application process.

After passing the application process and selecting her desired plot of land, Franklin and her sons worked throughout the summer with volunteers building their house – saving money on building costs and labor by doing it themselves.

She said Habitat homes are not free – she still has a mortgage payment every month and she works a full-time job.

The big benefit, she said, is that there is zero percent interest on her mortgage as she pays it off, thanks to building her home through Habitat for Humanity.