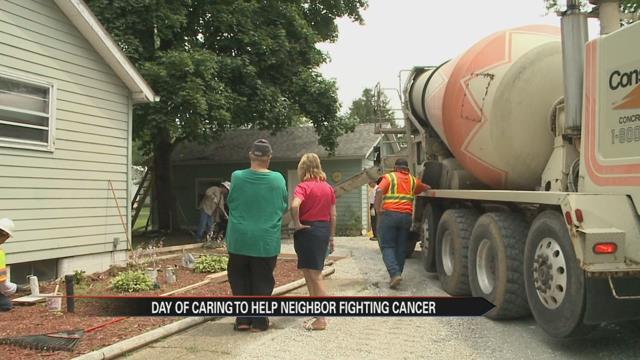 After struggling with an illness for over a year, one Niles native says his community is making sure he doesn’t have to fight it alone.

Mike Bowers says several non-profits came together to give him a break so he can focus on winning his battle with cancer.

Bowers says his chemotherapy sessions are physically taxing on him.

So major yard work that he could handle before has become too hard to do by himself.

Friday he realized, at least when it comes to the upkeep of his home, he’s never truly alone.

"They never met me before; they don’t even know who I am," said Bowers.

He may think he’s just a stranger to these workers, but they see him as a neighbor in need.

“It’s a very tight-knit community," said Bobby Tinkham, Wolverine Pipeline construction lead. "People try to stick together and help each other out as much as they can.”

For years he would do work like trimming his trees himself, but recently these chores became difficult.

“I haven’t been able to physically," said Bowers.

He was diagnosed with stage four colon cancer last year.

“I knew there was something wrong and I knew it was probably really bad,” he said.

While Bowers grew weaker from the intense treatment, community support for him grew stronger.

“To have a company like Wolverine Pipeline come in, do things that you normally do but can’t do at the moment is just amazing,” said Nancy Church, R.N. for Berrien County Cancer Service, Inc.

Because to these Niles neighbors, he’s not alone.

Bowers is now a part of a network of friends.

Berrien County Cancer Services does this annually for its patients.

They call it “A Day of Caring,” and they team up with local organizations to bring thousands of dollars of home care to patients for free.