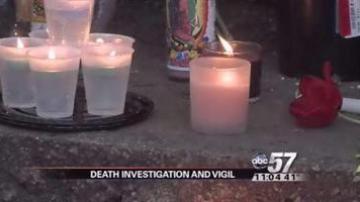 ELKHART COUNTY, Ind. — A candlelight vigil was held Tuesday night for 21-year-old Jesse Bowen. Police say he was shot in the chest and killed Monday night. They still have no suspects.

Alyssa Dellinger said she couldn’t believe it when she got a call that her cousin Jesse Bowen had been shot and killed.

“My other cousin called me and told me and I started freaking out and called my dad to find out what happened," said cousin Alyssa Dellinger.

Hundreds of people gathered tonight for a candlelight vigil in Jesse’s honor.

“He was really friendly. He has a lot of friends. There are so many people that care about him," said Dellinger.

Alyssa said it is easy to see why so many people loved Jesse.

“He was always making everybody laugh and I am just going to miss that," said Dellinger.

She said she can’t imagine who would do such a terrible thing to her cousin.

“He didn’t deserve this and they should be punished," said Dellinger.

“Never in Jimtown. I have heard of things happening in Elkhart, but this is the first time anything has happened to someone in my family," said Dellinger.

She said the loss of her cousin will be hard on her family for a long time.

“I am just going to grieve with my family and be with everyone that needs me," said Dellinger.

But she said they will get through this together.