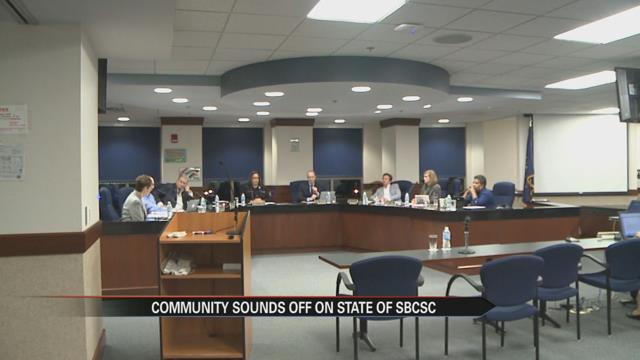 Members of the community are sounding off on the state of South Bend Schools.

Monday, residents called for action to help save their schools.

Some members of the audience sitting in on the school board meeting were hoping to hear proposals or ideas to solving the corporation’s growing problems.

After it was adjourned, some were still concerned this district might not have the answers to getting their students back.

“Looking at the bigger picture, what picture is bigger than having a child be educated,” said resident Debra Turner.

It was that big picture Turner, a graduate of the district, tried to paint for the school board.

She made a plea to officials to work to solve the major problem the corporation is facing this school year.

“The board needs to act before it’s too late,” she said. “Do your job, it’s obvious what’s going on, if they are doing [something], I’d like to know what it is?”

Turner and others feel the district is not doing enough to attract students.

“We’re not paying attention to our competitors,” said resident Samuel Brown. “Some people went away but if we do the right thing, they’re going to come back.”

Members of the board assured the community’s concerns were being heard.

“I want the public’s input on anything,” said William Sniadecki, SBCSC School Board Member. “That’s where I get all my ideas from, the public.”

But new challenges make coming up with answers to their questions a bit hard.

“The competitive environment of this state is affecting all of the urban districts and so we need to make sure that we’re watching our bottom line as well as providing excellent opportunities for our students,” said Jay Caponigro, SBCSC School Board Member.

The board will focus on the second count day of the school year that takes place in February.