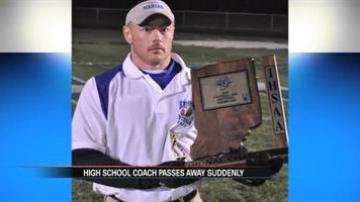 MISHAWAKA, Ind.-- The Marian High School community is mourning the loss of a football coach who died suddenly on Saturday.

Marian High School's Athletic Director said they will have counselors available on Tuesday for students who are having a tough time.

Tyran Ottbridge said, “I know it’s hitting a lot of our players real hard. He was like another father to a lot of us out here.”

Ottbridge and other football players said defensive coordinator Brian Kinzie was a mentor on and off the field.

Ottbridge said, “Coach Kinzie was a great man. One of my heroes. One of my favorite coaches here. If I needed somebody to talk to he was there for me every single time. He would sit down and talk with me for hours.”

On Saturday several players gathered at school to share memories.

Ottbridge said, “We sat in our locker room, cried a little. Then we started telling stories about him on how he inspired a lot of us.”

There has been a large outpouring from students on Twitter who say they looked up to Kinzie.

Ottbridge said, “When we won the sectional championship last year, he had the biggest smile on his face holding his first championship trophy.”

Athletic Director Reggie Glon said, "We do not have many details or a cause at this time. We just ask for prayers on behalf of his family and friends. The team has already been notified, and has been together yesterday for several hours at school."

"This is a terrible loss for the Marian family. Our prayers are with Brian's wife, his family, his friends, and especially with the young men who were blessed to be coached by Brian. Our young men have many positive memories of his love for the game of football and his care and concern for each of them. During the difficult days ahead we will rely on our faith and the support of the Marian family. We are grateful to the area schools who have reached out to us in support. Eternal rest grant unto him and let perpetual light shine upon him."