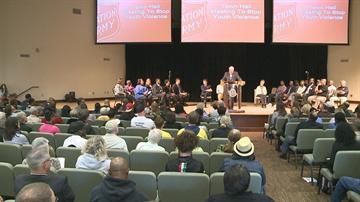 The year 2012 isn’t even half over and dozens of young people in South Bend have already been involved in shootings and murders, some as victims and others as suspects.  In the past week, within a few blocks of the Kroc Center, two young men have been killed in one shooting and two wounded in a separate shooting allegedly carried out by a 17-year-old.

“You live here, you live here, it’s all of us, this is our town,” said Former South Bend Fire Chief Howard Buchanon to the crowd.  “We should be proud of it and we should move forward.”

Politicians, police, school administrators, teachers and parents all took turns laying out ideas to help stop the escalating youth violence problem.  Teens currently in programs designed to keep them off the streets also spoke to the crowd that filled the auditorium.

Long explained that he knew violence and the consequences well, his own cousin was recently gunned down in Chicago.

“There are so many opportunities, but only if they provide it to us, they have to provide it to us and we have to go out there and reach it,” Long explained.  “We have to be dedicated like we really want to do something.”

At the meeting Digger Phelps and other leaders called for more youth programs, more volunteers for mentor programs, community focused policing and more vigilance by parents among other things.

Also at the town hall nearly 50 businesses and organizations pledged support for the effort to stop youth violence.