Community reaches out to family of Kristyana Jackson 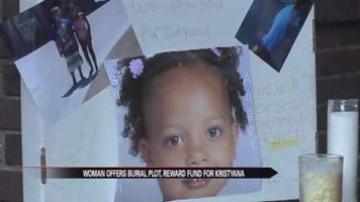 ELKHART, Ind. --  The Elkhart community is reaching out to the family of 7-year-old Kristyana Jackson.

She was shot in the head during a home invasion Friday night and died a few days later at Memorial Hospital.

Friends, family, and even strangers have been sending flowers, food and money to help the family.

One woman who has never even met Kristyana or her family, donated a burial plot and set up a reward fund to find Kristyana’s killer.

Height too lost her child to a bullet back in 1993.  Her son Joey Hasket was just 13-years-old.

“When my son died I was totally lost,” said Height.

When Height heard the news of young Kristyana’s death, memories of her own son’s death came flooding back.

She silently attended the vigil in support of the family and then went even further by donating her burial plot right next to where she laid her son Joey to rest.

“Two children, a little bit different situations but who both died of gunshot wounds, I thought they could be together,” said Height.

As if that grand gesture was not enough, Height set up a reward fund to catch Kristyana’s killers.

“They should be put away forever,” said Height.

She said that is how long Kristyana’s parents will feel the pain of the death of their daughter.

“It has been 19 years and the pain never goes away, but sometimes it does get softer,” said Height.

Anyone who would like to donate to Kristyana’s reward fund can do so at Key Bank. The family is also asking anyone with information about who killed their little girl to please come forward.