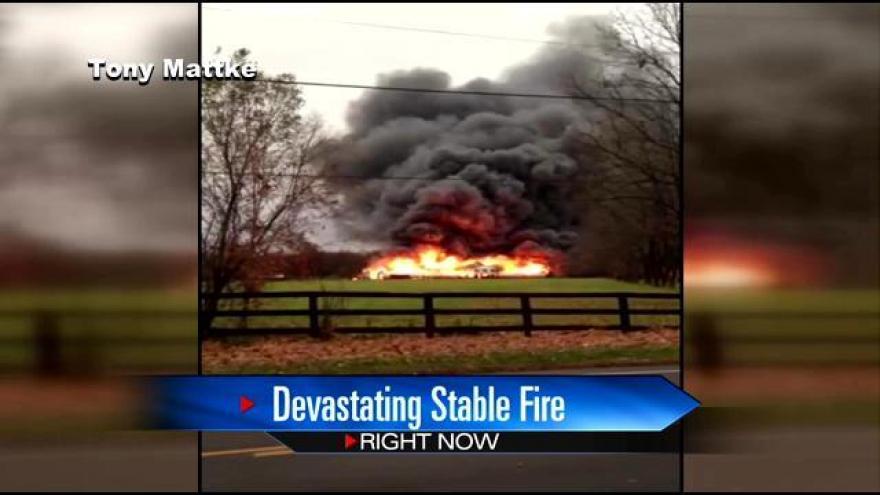 A massive fire at Smithfield Stables near Edwardsburg left 18 horses, 1 donkey and 1 show dog dead on Tuesday night. The devastating fire disrupted the water supply, so the entire village is under a boil advisory and Edwardsburg Schools cancelled class on Thursday.

On Wednesday the water department sent several water samples to a lab to be tested. They expect to have contamination results by a.m. on Thursday.

In the 911 calls the stable manager who lived in an apartment on top of the building sounded hysterical.

Ranee Conley said, “Everyone's heart is just breaking, broken. For the families that have lost their beloved horses. I mean horses are a part of the family.”

Conley said when her daughter was younger she learned to ride at Smithfield Stables on a horse named Opie.

Conley said, “It's just a sad time, she's pulled out the old pictures of herself with the horses and just remembering. Trying to remember the good."

Edwardsburg Fire Chief Bruce Stack said they pulled so much water from the system to fight the fire that it lowered the level below state regulations. Due to the pressure change in the water mains, the water superintendent imposed the boil order as a safety precaution.

Stack said his department was on scene in minutes, and they did everything they could to save the horses.

Stack said, “There was no way we could get them out. It was totally engulfed. I was on the first truck in there and your first thought was to get them out of there. Turning up the driveway you were met by flames throughout the whole building.”

Stack said the cause may never be determined but it's the largest fire he's ever seen in the village.

Stack said,“It will probably go down as undetermined. The state fire investigator will be here tomorrow morning to go through it. I really don't
think we will find anything because of the degree of destruction.”

Several local churches are offering free and safe water to residents in the community.