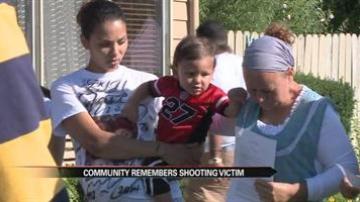 SOUTH BEND, Ind. -- The community gathered together once again Thursday evening, to remember a victim of gun violence. Francisco Guzman was shot and killed earlier this month. His death marks the 8th deadly of the year here in South Bend.

Unfortunately the family of Guzman knows this pain all too well. One of Guzman’s brothers was also shot and killed years ago.

“Every time I would come to visit he was always the one to welcome me. And now all of that is gone.”

“He was always very happy and make us feel very welcome,” she said.

But as she held a candle and said a prayer at his vigil – it is still surreal that her baby brother is gone.

“They took a brother, an uncle, a son a father,” said Guzman’s Jasmine Rodriguez.

He was a father of a 1- year-old boy named Frankie, after his dad. Guzman also had a baby on the way.

His girlfriend wore a t-shirt with their family picture.

On Sunday, August 3rd ABC57 is told Guzman received a phone call to go outside. When he opened the front door he was shot in the chest and killed.

His parents were inside the home and said to this day they can still hear that gunshot.

Pastor Michael Elliot agreed. He said the community has had enough.

“I think the entire community is tired of this. Except for the people doing this, they seem to think this is an acceptable lifestyle,” he explained.

But surprisingly the deputy mayor said violence is down.

“I feel like we are making progress in our community. More people are coming together to reduce the violence. But each and every death is one too many,” Deputy Mayor Mark Neal said.

With no one in custody, it is a death the family desperately wants answers to.

“I want justice. The people that did this to my brother not only did they do it to him they did it to all of us,” Brenda Rodriguez said.

Next Saturday, August 23rd, the family will be holding a benefit at Navarros Car Wash on Lincolnway West from 11am to 6pm to help pay for funeral costs.
Share this article: