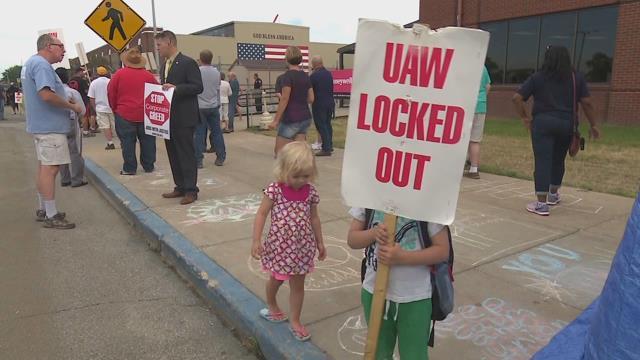 It’s been 54 days since Honeywell workers have been locked out by their employer.

Thursday, they rallied outside the main office and they brought back up.

Hundreds gathered to speak out against the company.

“We’re out here fighting for our families and the people we support,” said employee Adam Clevenger.

And protesters say the fight for fair wages will continue even after Thursday.

Many employees said they’re reduced to raising their voices on the outside, because they’re being silenced on the inside of the plant.

“They keep claiming they’re bargaining in good faith, this isn’t good faith. They haven’t been bargaining at all,” said employee Mike Mankowski.

These union workers are bargaining for a new contract.

But a spokesperson for the company says they want that too.

In a statement, Scott Sayres, the company’s communication director, wrote in part:

“The union has made exactly one counter proposal in [three days of bargaining]. At the end of the last session, the union committed to get back to us when it was ready to negotiate. We have not heard from the union since.”

However, these protesters say the company is painting a different picture as it was the one that said the contract wouldn’t work  and then locked them out.

“We’re coming up on two months now, they locked us on May 9, they came in at 6 AM they decided to walk everybody out the door and we’ve been out here ever since,” said Clevenger.

So now these workers are joined by their families in this fight and a mayor that wants to see a resolution form quickly.

“I wanted to make sure i was here to let them know that we see them, we hear them and we really want to see their families taken care of and see them back at work for fair wages and good benefits,” said South Bend Mayor Pete Buttigieg.