Company fined for its role in explosion that injured four 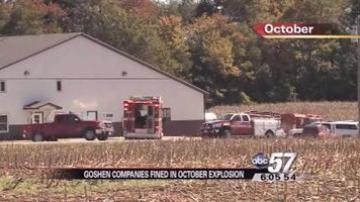 GOSHEN, Ind. - A company was fined for an explosion that injured four people in October.

Two safety orders were put in place: one against the company, T&T Fertilizer, and the other against Southwest Enterprises, a welding company. IOSHA determined that both companies shared a role in the explosion that lead to a 2,000 gallon ammonia leak.

Both companies shared the blame and neither appealed. The penalty for Southwest Enterprises has been paid. T&T Fertilizer has until the end of the month to pay their fine. The amounts of the fines were not made public.