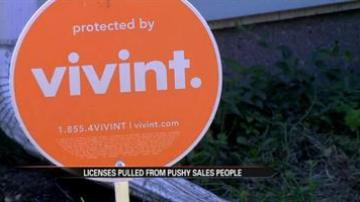 Wednesday, Lieutenant Pat Hechlinski of the Crime Prevention Unit of the South Bend Police Department read online complaints written by residents in the Harter Heights neighborhood who were sick and tired of the Vivint home security salesmen.

"This is something that we looked into to see if there's a way to stop this activity because there seemed to be a lot of complaints, more than typical," said Hechlinski.

The complaints were posted to community Facebook pages and the email listserv for homeowners in Harter Heights.

They were full of story after story of bizarre interactions

"Jumping fences obviously and just the pushiness. The not willingness to go away when asked to do so by the homeowner," said Hechlinski.

On Tuesday, Robin Hersom described her altercation with a Vivint salesman.

"He came up on the porch and just started his sales pitch about how he's not a salesmen, he's just a representative," said Hersom.

She said she wasn't interested, so he pulled out crime stats.

"He threw at me what about all the crime that's happening in River Park and I said that's kind of rude because there's crime everywhere," said Hersom.

But the company backed down.

"They have willingly pulled their people from what was conveyed from city legal," said Hechlinski.

If you use Vivint or are still interested in their security systems, you can find them online.

Otherwise, South Bend residents shouldn't have to worry about these salesmen any more.