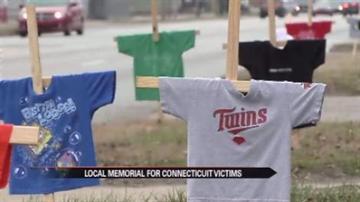 SOUTH BEND, Ind. -- A company on Lincoln Way West in South Bend has set up a memorial for the victims of Friday’s school shooting. Temple Tree Service hopes to raise money for the families of the murdered children.

Temple Tree Service has been a family owned business in South Bend for 50 years.

Like most people, the events in Newtown Connecticut affected him greatly.

Temple and his family are going to donate the money these 28 ranks of firewood would normally bring in and as a tribute to the victims of the crime.

They also set up a memorial in front of the business.

"We have to do this many crosses and it has to stretch this far down the road. It's very sad to me, to see that,” said employee Jackie Appleman.

The display is getting attention.

"We all commented on it at our table and said that was wonderful to see, that is very special,” said Jo Nemeth, a visitor to the cafe across the street.

Nemeth is from South Carolina and just flew into South Bend. She says the display is exactly what is needed.

"The impact is intense and deeply felt,” said Nemeth.

For Temple, it is difficult to talk about.

But the memorial makes the statement he wants us all to remember.

"We are our brother's keepers, even if they're little people we need to keep an eye open for them,” said Temple.

Temple is asking for people to be respectful and leave the crosses alone. At least one shirt has already been stolen and had to be replaced.