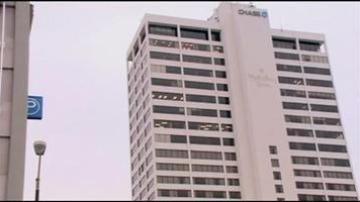 SOUTH BEND, Ind. -- Now that there's a deal on the table to buy South Bend's Chase Tower, many are wondering what it will take to get the landmark structure ready for business.

City officials say they've been down this road before with other potential buyers, but say they have a good feeling about this deal.

Stanfield and the Janee Hotel Group have a deal to purchase the Chase Tower for $5.2 million.

The city landmark has fallen into disrepair in recent years.

Some even wonder whether the building could pass inspections.

Franklin says his group is committed to doing whatever it takes and the buildings' current condition is not a concern.

He says Harley Stanfield is ready to make a major investment, approximately 8 times the purchase price, to renovate.

"We're totally refurbishing the entire building. The building is becoming passive solar, state of the art, and green," said Franklin.

All of this is welcome news to the city's economic developers who see the renovation of the Chase Tower as essential to the future of downtown south bend.