Comparing local and national snow depth over the past two years 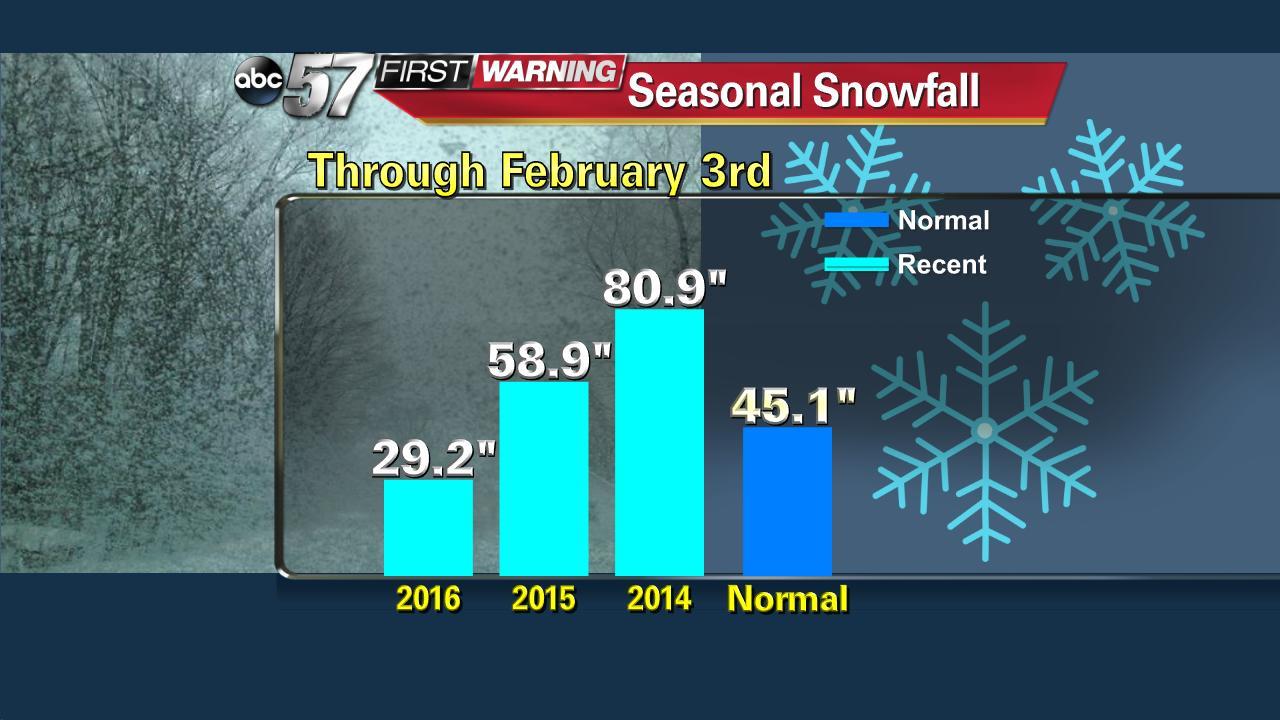 Even though the winter of 2013-2014 was a harsh and snowy one for Michiana, that wasn't necessarily the same story across the continental United States.  According to data collected by the National Operational Hydrologic Remote Sensing Center (also known as NOHRSC), a branch of the National Weather Service, the percentage of the continental United States that was covered in snow on February 3rd for each year shows that winter 2013-2014 was not as harsh as it was here.  Below breaks it down by percentages in snow cover for each year since 2014: Last winter (2014-2015), only 38% of the continental United States was covered in snow by February 3rd.  Meanwhile, last winter for Michiana, by February 3rd, we had already topped the normal amount of seasonal snowfall by at least ten inches.  Nationally, 2015's lower percentage is due to the lack of snowfall in the Sierra Nevada Mountains in California.  The lack of snow pack in the Sierra Nevada, especially in 2015, lead to yet another year in drought along the western coast of the United States.  This can be seen in the national snow cover map from 2014 compared to 2015 below: Notice the difference from 2014 to 2015 in the midwest, especially near Michiana, where the expanse of snow cover has retreated from northern Kentucky in 2014 to the midsection of Indiana.  Now looking towards California along the Sierra Nevada Mountains, located to the right of the shaded green region (known as the Central Valley), the snow pack covers much more area in 2014 than in 2015.  Now fast forwarding to 2016, here's a snapshot of the snow cover on February 3rd, 2016: As you compare each of the national snow cover maps since 2014, you will notice that 2016, the snow cover line retreats even more northward in the midwest than in previous years.  Even though the lack of snowfall across the midwest is apparent in the 2016 map, the amount of snow cover in the west, especially along the Sierra Nevada Mountains is much more apparent.  According to the California Department of Water Resources, which recently did a survey of the snow pack in the Sierra Nevada Mountains, the snow water equivalent just measured on February 2nd, 2016 was on average from observations locations in northern and southern Sierra Nevada mountains, 114 percent above the February average.  That recording was the highest since 2005 for the area.  This does not mean that California is fully alleviated from the drought that has plagued the area over the past four years, but it's an improvement and the best snow pack observation since February 2011.

As for Michiana, even though the snow cover was lacking in the national snapshot for 2016, what does the rest of the month have in store for our area?  If you missed it, check out Chief Meteorologist Tom Coomes' article on the February Outlook.