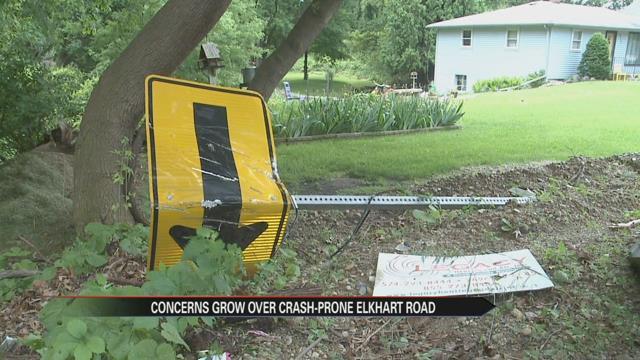 Two separate accidents were reported on SR 120 Monday. Residents say the stretch of road where the two accidents happened is dangerous.

Monday morning there was an accident on SR120 west of CR17.

“Two ambulances, two fire trucks, a lot of paramedics. It was scary,” said Rick Sweazy, who lives across the street from the accident site.

According to Elkhart County crash reports a vehicle was traveling too fast, lost control, and struck another vehicle.

There were no fatalities, but there were injuries in both accidents.

Living west of CR 17 on SR 120 for over two years, Sweazy says damaged guardrails and bent over road signs are normal.

According to Elkhart County crash reports, there have been at least 8 car accidents from CR 15 to CR 19 since May 1, 2015.

Various reports refer to the curve west of CR 17 and low visibility.

“The biggest challenge is the low visibility going both ways is limited and it's only about a quarter of a mile and when cars are going 55 miles an hour it doesn't take them long to get up on your quickly,” says Sweazy.

According to INDOT representatives a follow up study to the curves is due for July 2016.

The representative adds since a concern for safety has been raised traffic engineers will be reviewing SR 120 from CR 13 to CR 19.