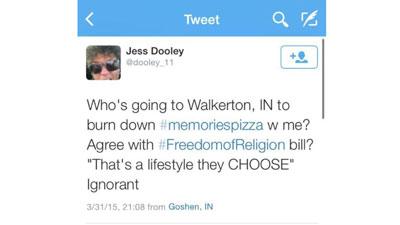 It has been three days since a local high school coach tweeted a threat about burning down a small pizza shop in St. Joseph County. And now, the high school is breaking its silence.

For now, Dooley will remain on unpaid leave until the school district completes its investigation on the situation.

Tuesday, Dooley tweeted "Who's going to Walkerton, IN to burn down memories pizza with me?” to her 169 followers, including students of Concord High School.

Both the tweet and her profile have since been deleted.

"As an educational institution, Concord Community Schools believes that the exchange of differing ideas, concepts, and principles is a valuable and meaningful part of the educational process. It is not necessary that everyone agree with every idea offered. It is, however, both critically important and absolutely necessary that the expression of any idea comport with the minimum expectations established by federal and state laws. The active promotion of illegal violence cannot be permitted.

On March 31, Jessica Dooley, a Concord High School athletic coach stepped outside that boundary, when on her Twitter feed she advocated for the burning down of a business located in neighboring St. Joseph County. That feed is followed by many Concord High School students, including athletes on her teams. Ms. Dooley admitted making this statement and she was suspended without pay pending the completion of Concord Community Schools' investigation. Law enforcement authorities are also investigating this matter.

The promotion of illegal and violent conduct by one of its employees is a serious matter that Concord Community Schools must address and appropriately discipline."

Walkerton police opened an investigating on Dooley's tweet and sent the findings to the St. Joseph county prosecutor, and it is now under review.