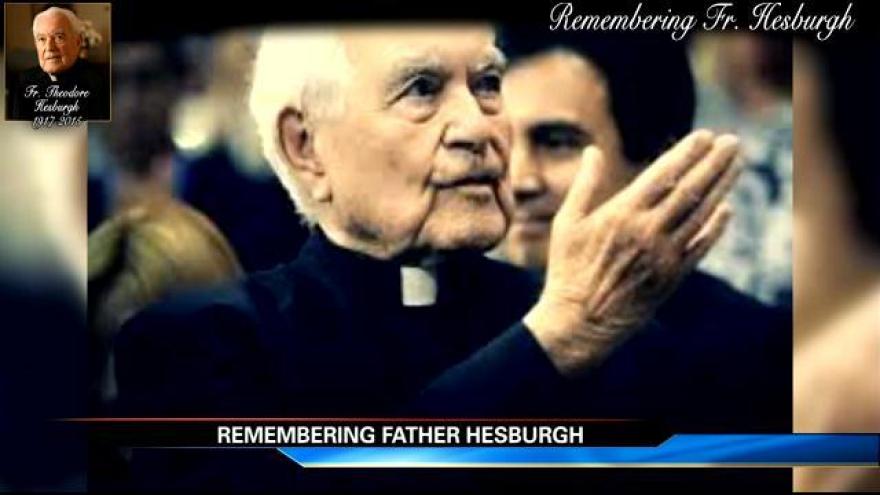 NOTRE DAME, Ind. - It was a somber day on the University of Notre Dame's campus, after losing arguably the most influential president in its history, Father Theodore Hesburgh.

After talking with one of Father Ted's fellow brothers with the Congregation of Holy Cross, they are celebrating a long-lived life full of success.

It was hard for Father Wilkinson to find the words to describe a 97-year life full of great accomplishment.

“He is probably one of the most influential president since the founder,” said Wilkinson.

Father Wilkinson got to know Father Ted while working side by side with him for several years.

“He is really a remarkable man, intellectually, academically,” said Wilkinson.

He became the University's leader back in 1952 and for 35 years worked to bring equality to every class of people.

“He believed so deeply that it wasn't him, but God working through him,” said Wilkinson.

After his retirement in 1987 Father Hesburgh continued in the priesthood as a member of the Congregation of Holy Cross.

“The legacy will continue I think what Father Hesburgh has done has given us a model,” said Father Wilkinson.

It is a model to take risks and stand up for everything you believe in.

“So, yeah, there's a sadness that an end of an era is gone, but on the other hand, what he's left behind is something that we can be very grateful for,” said Wilkinson.

No one recognizes that greatness more than current University President Father John Jenkins.

“One of the things he's said that's always stayed with me is stay close to the students, I mean he was loved by and he loved our students,” said Jenkins.

A love that those closest to him believe lasted as long as possible.

“He lived a long, productive, holy life and what more can you ask for?” said Wilkinson.

It is a little easier knowing there is another bright star shining over campus.

“So I think there's a sense of gratitude from our own faith, yes his life has ended here, but he's finally entered and met the fullness of life,” said Wilkinson.

Already across campus signs and banners are going up on light poles and buildings remembering Father Ted's legacy; a celebration that will continue until his memorial service Wednesday night.
Share this article: