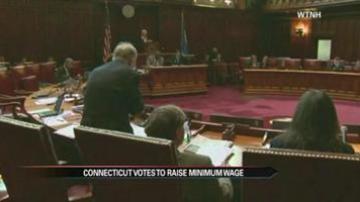 HARTFORD, Conn. -- It looks like the minimum wage debate is moving forward one state at a time.

Connecticut approved a bill Wednesday to raise the minimum wage from $8.70 an hour to $9.15 by January next year.

Democratic Governor Dannel Malloy who proposed the increase announced he would sign the bill into law but not everyone is happy about it.

"What you're going to see is lowering of hours, lowering of the number of employees getting hired," said Senator Rob Kane.

"I'm excited about the future of Connecticut where people can look forward to working forty hours a week and not living in poverty," said Governor Daniel Malloy.

The bill makes Connecticut the first state to match democrats' proposal to raise the federal minimum wage to $10.10 a move President Obama supports.