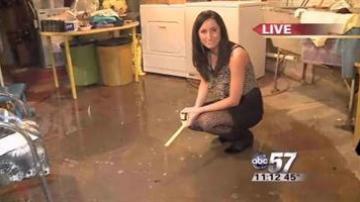 SOUTH BEND, Ind. -- A massive construction project on Diamond Avenue is supposed to help the environment.  Crews are putting in pipes to separate sewage and storm water.  One woman living there said her basement is flooded and it's the worker's fault.

Brown said she knew the construction project was going to be messy, but she said she didn't realize that mess would flood into her basement.

"When my son went down there, he said 'Mama, you won't believe what is down there; there is
water backed up in the basement'," said Bertha Brown.

Because she is in a wheelchair.  Bertha cannot even get downstairs to mop it up.

"I would like them to be responsible for cleaning it because I can't get down there to clean it," said Bertha Brown.

She blames workers who are digging holes near her drainage system.

"They dig big holes, big enough to put you in them," said Brown.

And she says the holes and the water aren't the only problem the construction has created for her.  She can only leave her home through her back entrance lamp and she says workers are blocking her driveway.

"When they are there, it is difficult for me to get out," said Brown.

Birtha says she is ready for the workers to leave, but the foreman says it is going to take at least two months until they are gone.