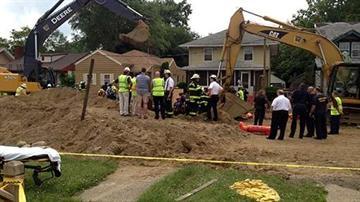 It took more than 50 emergency responders to get him out of the hole.

Firefighters say the biggest challenge was preventing the hole from caving in.

They cut wood slats to support the outer edges of the hole. Meanwhile, tubes were brought in to suck out water as crews continuted to dig deeper.

The worker was about 7-8 feet down, but officials did not say how he became trapped. An investigation is currently underway to determine how he fell in.

The Public Works Department has patched the hole to prevent any one else from falling in.

The worker was put on a stretcher and taken to the hospital after he was brought to the surface.

Firefighters on scene said he appeared to be doing fine, but ABC57 News wasn't able to confirm an exact condition.