Controlled burn gets out of control in Cass County 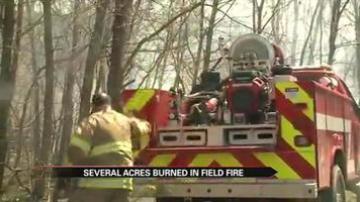 CASS COUNTY, Mich. -- What was supposed to be a controlled burn turned into an out of control fire in Cass County Friday afternoon. Firefighters said because it was a heavily wooded area, it was difficult to get to all of the hot spots.

"When I got here I was told they were having a controlled burn, a plot for deer but it got away from them. When I arrived, it was spreading through the woods. About 5 acres of the woods was on the fire at the time," said Chief John Locke of the Central Cass Fire Department.

He said the person who started the fire did not have a permit, but likely won't face criminal charges.

"We'll just talk to them and tell them to get a burn permit. It's so hard to enforce anything. It'll be enforced through the DNR," said Locke.

Fire crews were still on scene Friday around 6 p.m. to make sure all the hot spots were out.