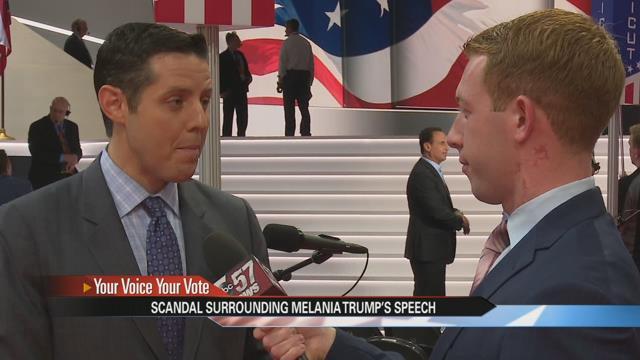 From inside the convention hall, the ABC News political director describes day one of the Republican National Convention as ‘chaotic’ and says Melania Trump’s alleged plagiarism scandal is ‘unheard of.’

“Well, if it was innocent it should’ve been caught; if it’s not innocent then it’s obviously a fire-able offence, it may be anyway. The worst thing you can do as a campaign is to let down the candidate’s spouse, that’s worse than letting down the candidate, him or herself, so someone’s gonna have to answer for that,” said Rick Klein, ABC News Political Director.

“People want to see who the spouse is going to be. You live with the First Family for four years or eight years; you want to be comfortable with that person in your living room and there’s intense interest in it. I think it’s a natural inclination,” said Klein.

Day two of the convention is in full swing some of Donald Trump’s children testing out the stage ahead of their primetime speeches.

Indiana’s delegates will be sitting on the convention floor throughout the week and Klein explains just how important a decision it was for Trump to choose Indiana Governor Mike Pence to be his running mate.

“Pence was a homerun for people in this room. Conservatives [are] very excited about Mike Pence; he’s a name that they know very well from House leadership, from his time as a governor, an Evangelical Christian; a good, solid conservative up and down the boards,” said Klein.

Klein says putting Pence on the ticket has energized a lot of voters, though the Republican Party is not entirely out of the dark yet.

We asked Klein if there is a faction of the Republican Party that has just broken away because of Trump’s rise.

“Yes, and the fact that there are maybe a couple hundred delegates that, even now, are ‘Dump-Trump’ delegates and ‘Never Trump’ delegates is astounding and unprecedented in a convention that has a presumptive nominee,” Klein answered.

Some evidence of the party’s divide could be seen Monday when a number of delegates began chanting during an afternoon session demanding a roll call vote.