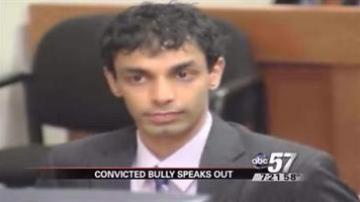 PLAINSBORO, NJ -- For the first time, we are hearing from a Rutgers student who has been convicted in a bullying case.

Dahroon Ravi was found guilty of a hate crime for spying on his gay roommate who later took his own life.

Ravi used a spy webcam to tape Tyler Clementi in an intimate encounter with another man, then invited others to watch a second date.

He claims he never bullied Tyler.

"I was 18. I was stupid. I was just, like, a dumb kid, not thinking about anything," claimed Ravi.

Ravi turned down a plea deal that offered no jail time because he refused to admit he was guilty of a hate crime.