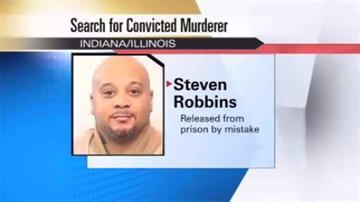 CHICAGO — Police in two states are on the hunt for convicted murderer mistakenly released by an Illinois prison.

Illinois and Indiana police are on the hunt for Steven Robbins, 44, of Indiana.

Robbins was taken to Illinois for unrelated drug charges but after those charges were dropped, he was accidentally released.

He was serving a 50-year prison sentence for murder and carrying a handgun without license.

Robbins was not set to be released for at least another 16 years.