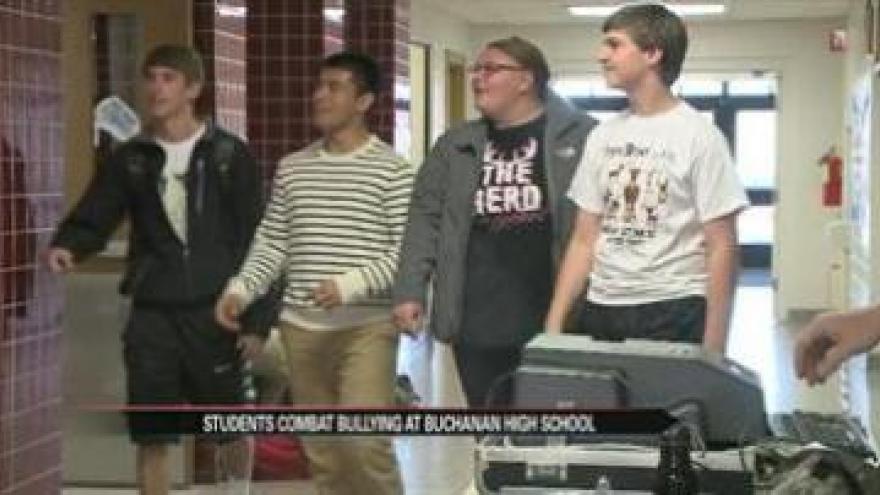 BUCHANAN, Mich. – A group of Buchanan High School students is helping to make not just their classrooms, but their community a nicer place.


Three different programs are working together to promote student involvement and put a stop to bullying.


“Be the change you wish to see in the world,” said Dylan Catalano.


The Buchanan freshman’s favorite quote from Gandhi rings true in his school.


Catalano is one of the leaders of Mean Stinks. It’s a national campaign that the Bucks have embraced and the students feel it is making a change.


“It is our anti-bullying program, but it’s done so much more than that. It’s made people at Buchanan more like a family,” said Catalano.


The program is spearheaded by high school students who perform skits at the middle and elementary schools.


“They started to realize oh, it’s the little things that can push someone into being depressed because of bullying,” said Catalano.


The emphasis for the program is to make the educational environment friendlier and it encourages all grade levels to interact.


The success of Mean Stinks has even pushed Buchanan to create its own girls-only group, called Girls Be Positive.


“This just focuses on the girls, the Twitter drama, and the girls aspect of being bullied,” said senior Brittany Schmidt.


Recently they hosted an overnight event where girls from 9th through 12th grades got to know each other through crafts and other workshops.


“So when you’re walking down the hall and see a 9th or 10th grader, you don’t just ignore them, you can say, ‘Hi, did you have fun at Girls Be Positive?’ It just brings everyone more together,” said Schmidt.


One way the whole school, the district and the entire community are sticking together is through The Herd.


“The Herd originally started as a student section, but we grew it to be something more, so it’s a community wide thing,” said junior Alex Martinez.


The fan section started at basketball games, but has grown to cover a number of sports. The students even helped collect donations for local fire victims in their community.


For those involved in all of the programs, they said you can truly see a shift to more positive attitudes.


“I’ve been here for 4 years, so personally I can say I can see the difference from when I was as a freshman to where I am now, with The Herd and everything, just the way it’s changed the entire feeling of the school, it’s crazy,” said senior A.J. Reed.


Tune in next Tuesday when ABC 57 takes you to Madison Primary Center in South Bend.


They are using dogs to helps kids in the classrooms.


Check it out during ABC 57 Morning Edition starting at 5 a.m. on Tuesday, May 13th.