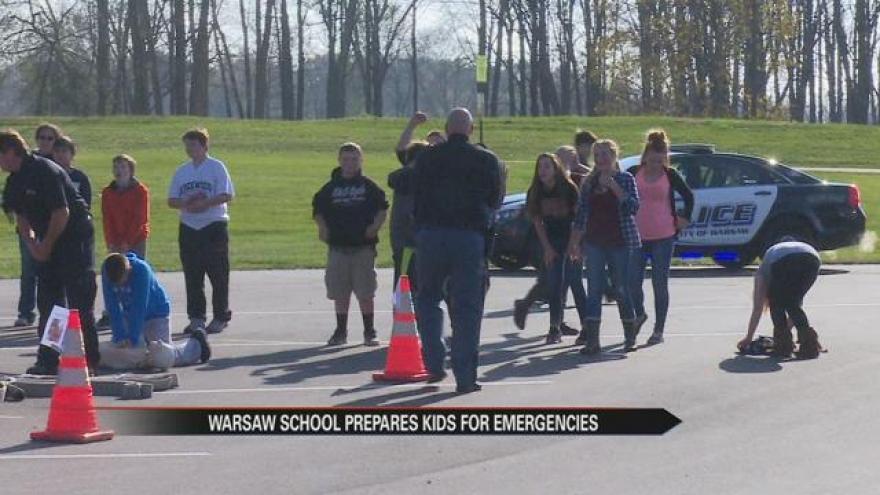 Would your child know what to do in case of a fire or another emergency? One Warsaw middle school wants to make sure their students have the answer to that question.

All of Warsaw’s first responders didn’t spend their Wednesday afternoon’s at their post, but rather at Edgewood Middle School.

“We’ve had people here guests here helping us to bring this to life for kids tell their stories show them life-saving skills, make the world a little safer for them,” said JoElla Smyth, the Principal at Edgewood.

For the last month, the school has presented a safety program to the students and they learned things like fire safety and how to perform CPR

The middle schoolers used all the safety skills they learned and put it to the test in a relay race that had first responders and kids working together in teams.

“I knew that it would be a little bit different than normal policing then I am used to but the more and more that I’ve been able to serve these kids,” said Roy Navarro, the school’s Resource Officer from the Warsaw Police Department.

“There the first ones there if something happens they have to call us we are a couple of minutes out if they can get something going for us CPR, things like that, they can probably save a life,” said Max Kinsey from Warsaw/Wayne’s Fire Territory.

Instead of being afraid of dangerous situations, this helped kids understand what to do in case they’re faced with an emergency.

“I think it’s a good idea because it gives kids know what to do in different situations such as finding a kid unconscious on the ground, if there’s a fire,” said Dante Koontz, a student at Edgewood.

Principal Smyth says she doesn’t want her students to be afraid of calling for help, which is the main reason why they decided to do it.

She’s never seen something done like this before, which is why she thinks Edgewood is a very cool school.

“We think it makes us kind of cool, it’s unique and it really is community, safety, kids, learning, I think it’s an all-around pretty good package,” said Principal Smyth.

Since the program was so successful, they hope to do programs just like this one for years to come.