Norah Plonski, a second grader at Hums Elementary, is putting action behind an idea that has spread through the community.

“She just kind of has that nurturing side to her and this is a project that lets that really shine,” said Norah’s mom Kristen Plonski.

Norah first heard about a buddy bench through her teacher’s cousin in Fort Wayne. She says she immediately thought her school needed one too.

“I’ve seen a lot of lonely kids so I thought it would be nice to have it at my school,” she said.

A buddy bench is all about inclusion. Kristen says it’s not out of character for Norah to be thinking of others.

“She’s just years beyond herself and she doesn’t even know it,” said Kristen. “I couldn’t be more proud.”

The bench will create a place for a child to sit if they have no one to play with during recess. It’s made entirely from plastic caps.

The collection of caps started in November. Now Norah and her friends are sorting, weighing and storing the pounds of donations pouring in.

“I thought at one point no one is going to start but on the second day there’s been like 20 kids bringing them in,” said Norah.

What she first thought wouldn't yield a big turnout, has turned into something bigger than she imagined.

“When we have donations come in, they flood in,” said Kristen. “It’s not just a little trickle. It’s massive, and it’s amazing.”

And those donations are coming in daily.

“We actually have phone calls coming in almost daily of people wanting to drop off caps,” said Jeffrey Yohe, principal of Hums Elementary.

Yohe says the buddy bench project fits in with the school’s theme of creating empathy in its students.

“I hope it will help kids out at recess,” he said. “And just help them work together, look out for each other and create more friendships.”

Norah says she won’t stop collecting until people stop donating. She says if she gets enough, she wants to get a picnic table for her school as well.

And with no end in sight, the collection could spread to other scho 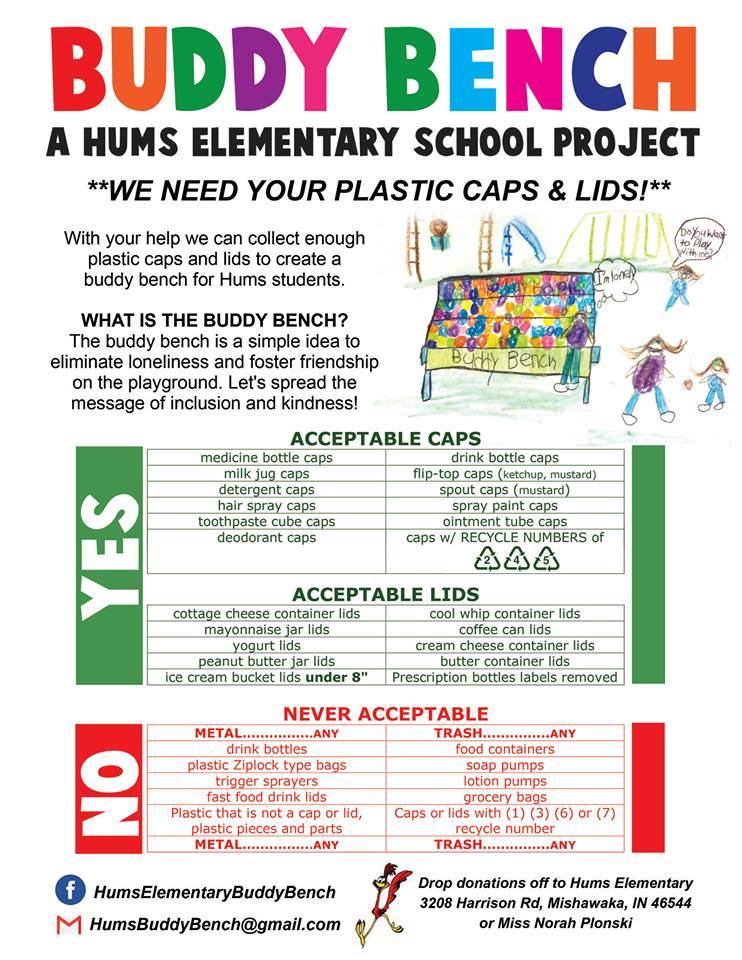 ols in the district.

Only plastics with the recycle symbol of a 2, 4 or 5 can be accepted. A full list of acceptable items can be found in the photo to the left.