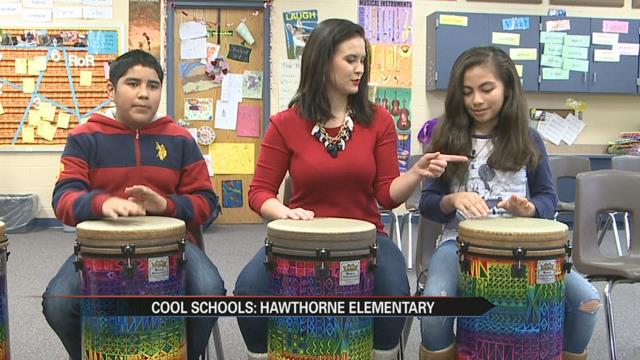 Students at Hawthorne Elementary School in Elkhart are being given instruments to help them succeed inside and outside of the classroom.

The school has a music program called "Drum 2 Change" and students who participate do better academically than those who do not.

“When it comes to standardized testing in the state of Indiana, they are outperforming their peers here but they’re also out performing their cohort across the district,” said Music Teacher and Drum 2 Change Instructor Dawn Ashton.

The students spend about 32 hours throughout the school year just practicing their parts. They also have various performances outside the school and will play for Indiana University students in the coming weeks.

“It’s really fun that you get to learn new stuff that you’ve never learned before,” said Sara Contreras who is in 5th grade.

Guadalupe Reyes is in 6th grade and has been a part of the group four years. “It’s hard at the beginning because you don’t know the lyrics but in the end it’s easy,” Reyes said.

On the outside it seems like they are just having fun but really they are learning so much more like how to focus and which style of learning works best.

“If you want to make a part perfect, you have to have teamwork and focus on it. It makes me focus on the things that really matter like homework,” said 6th grader Angeleigh Mota.

Ashton has seen how much this program helps students. “Science has shown us that both halves of the brain do different things and the more you’re involved in music, the more those two sides create connections between the left and the right side,” she added.

This year the program has close to 200 students. “Their brain is learning how to communicate with itself and how to process information more quickly,” said Ashton.