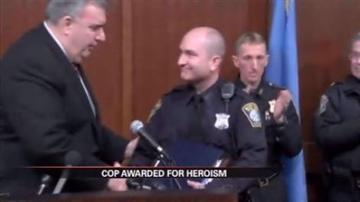 BOSTON. -- Monday night, we told you about a heroic Boston police officer who saved a life and Tuesday his Christmas gift was an award handed out by his department.

Officer Edward Norton was honored for his heroism after jumping into 40-degree waters in the Boston Harbor to rescue a woman.

He received a commendation from his police commissioner and a proclamation from the mayor.

Before the big jump he took off his gun holster but forgot his bullet proof vest which began to weigh him down.

He said the only time he hesitated was in mid flight when he realized he didn't know exactly what was in the water waiting for him.

"As I was in the air I was thinking, I don't know what's under the water here, if there are any old poles," said Officer Norton.

The rest of his squad was so impressed by his immediate leap and one-armed swim to the raft, they put a picture of his face on David Hasselhoff's body.