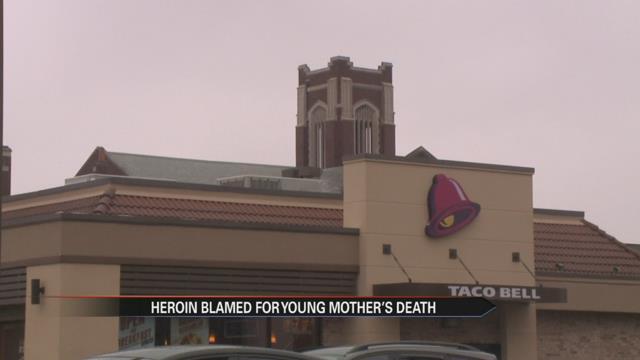 Heroin may be to blame for a Michiana mother’s death. Tuesday morning just before 11a.m. a woman’s body was found in the bathroom of the downtown South Bend Taco Bell.

Coroner Randy Magdalenski feels that heroin overdoses are on the rise in St. Joseph County.

As a former paramedic and firefighter, he’s upset that he keeps receiving calls for heroin deaths.

Magdalenski said, “Yes it is a pain! It’s starting to get upsetting to go to these calls to see these heroin deaths because these people are addicted to it. It’s highly addictive.”

26-year-old Aundreana McCall was found in the fast food restaurant's bathroom and he believes she is the latest woman to die from a heroin overdose but toxicology results are pending.

Police said when they arrived on scene it was too late to use Narcan to revive McCall.

Captain Robert Hammer said, “Our officer contacted other officers and they contacted the fire department who was able to get in using some breaching tools and they found an unresponsive female lying on the floor in the bathroom.”

Magdalenski said it appears she had a history of heroin use.

Magdalenski said, “And then having to make that call and notify the family that we unfortunately we have their daughter, their son, their loved one that was deceased and we suspect drug use. That’s hard.”

As police investigate, Magdalenski is trying to make sense of why heroin use and abuse is increasing.

Magdalenski said, “Through September we’ve had 19 this year. 21 total for 2014, and so far this year, heroin overdoses I suspect since October 1st through yesterday we’ve probably had 8 or 9 that we are waiting on toxicology and autopsy results.”

Magdalenski said he's fed up and hopes the distributors of this deadly drug are caught.

Magdalenski said, “They are really selling a drug that’s killing people. In my opinion they’re killers as well as dealers and what do we do with killers? Try to find them and get them off the street.”

Magdalenski is hoping people who are suffering from heroin use will seek help and notify their loved ones of their addiction before they receive a fatal hit and it’s too late.