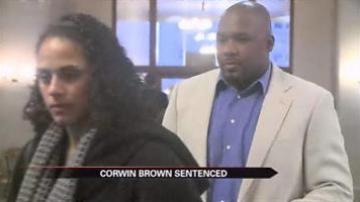 ST. JOSEPH CO., Ind. -- After a seven-hour standoff with police last August, Corwin Brown walked away from court on Tuesday with four years of suspended sentence and probation because of his continued medical treatment and family.

Count 1 was Confinement, a Class B felony. It was determined that the state would dismiss that count on Tuesday.

Count 2 was also Confinement, but a Class D felony. He will serve two years suspended sentence on probation.

In total, Corwin Brown, will serve four years of a suspended sentence on probation. He will also have to pay over $8,000 in restitution.

A judge decided his progress and family as her reasoning for not sending him to jail. The prosecution didn't object.

Melissa Brown, his wife, tearfully spoke in court on Tuesday.

She said, "I don't consider myself the victim. He's gotten alot of help. He's moved home and we're rebuilding our family with our children. It would not be good for our children for him to go to jail."

The prosecution also said that Mrs. Brown is not the type of victim who has suffered from abuse. The judge then asked Corwin Brown, "Mr. Brown, is there anything you want to say?"

He responded in two words, "I apologize." He also went on to say he's disappointed for putting his family in that situation.

To the judge, Brown said he had to lose a job he loved, was separated from his family, and had to go through court for the first time ever.

The judge said she is pleased with his progress and hopes he stays on the path with doctors.

"There's a lot of help and hope out there, and I'm glad you're able to see that light. I hope things move forward with your family."

Corwin Brown would make no comment to the media.