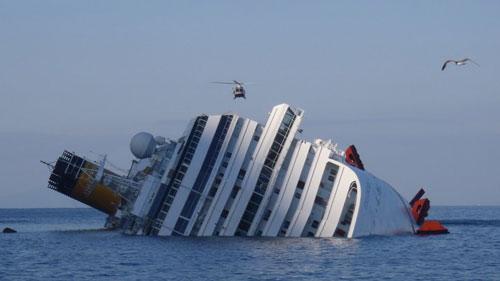 GROSSETO, Italy (CNN) -- The captain of the Costa Concordia is guilty of manslaughter and other charges related to the ship's fatal wreck in January 2012 off the Italian coast, a judge announced Wednesday night, capping a tumultuous 19-month trial and providing a little more closure for dozens of grieving families.

Lengthy trial or not, the three-judge panel needed only about five hours to decide the fate of Francesco Schettino. Their choices: Agree with prosecutors who cast the captain as an "idiot" who abandoned ship like a coward, or with defense lawyers who characterized him as a "scapegoat" who ended up in a lifeboat only because he lost his balance and fell into it.

The judges apparently sided with prosecutors, and sentenced Schettino to spend 16 years in prison and to pay court costs.

It could have been worse. The former captain faced a possible sentence of 26 years behind bars for convictions for causing a maritime disaster, abandoning ship and multiple counts of manslaughter.

The nightmare will never end for the families of those 32 people who died after the cruise ship, captained by Schettino, crashed into rocks off the Tuscan island of Giglio.

And for a while, it may have seemed like Schettino's trial wouldn't end either.

Over the past two years, the judges heard from a wide variety of witnesses, including passengers, crew members and technical experts.

Those testifying included the captain's female guest on the cruise, Domnica Cermortan, a Moldovan dancer who testified that she was in a romantic relationship with Schettino and that she was with him on the bridge when the accident occurred.

Schettino admitted to the court that his reason for sailing close to Giglio -- leading the ship to hit rocks -- was to "impress the passengers."

Just before the judges got the case, the captain took the opportunity to speak again.

Breaking down in tears, Schettino recalled that January day three years ago.

And since then, Schettino insisted, he's become a victim, processed by a "media meat grinder."

Schettino's lead lawyer, Domenico Pepe, began closing arguments Monday, saying the Champagne bottle used to christen the ship when it was put into service in 2006 did not break.

"Everything about this ship and this process since then has been a mystery so far," he said.

Pepe addressed each of the charges against the captain, starting with the count of causing a shipwreck and maritime disaster.

He said helmsman Jacob Rusli Bin allegedly did not understand English -- a language he was required to speak -- when Schettino gave the orders to turn the ship away from the island. Therefore, the attorney argued, Rusli Bin caused the accident -- not Schettino.

Rusli Bin was subpoenaed to testify, but his last known address was in Indonesia, and he could not be forced to come to the court in Italy.

Schettino's defense also hinged on alleged malfunctions of the ship's equipment and infrastructure, including claims that the ship had faulty watertight doors and generators, and that the elevators did not work when the ship was listing. These claims were hard to verify because much of the ship was immersed off the coast of Giglio for many months after the accident.

"Everything that did not work on the ship is part of the cause of the accident," Pepe told the court. "Lights didn't work. People fell into holes. Elevators got stuck."

Pepe ripped the prosecutor, who referred to Schettino as an "idiot" in his closing arguments last week.

The lawyer offered one last defense of his client Wednesday, even as he said it would be "easier to fly than defend Schettino," given all the barbs directed his way by the cruise ship company and media who "needed a scapegoat."

"In these three years," Pepe said, "Schettino has suffered the same as a 30-year sentence."

Pepe tried to explain why his client left the ship ahead of so many passengers.

He used a graphic to illustrate the inclination of the ship at the time Schettino apparently lost his balance and fell into the lifeboat that took him to shore. He said that once on shore, Schettino was able to conduct the rescue operation and that he never lost control of the operation.

The attorney addressed the famous exchange between Gregorio De Falco -- commander of the Livorno Port Authority the night of the accident -- and Schettino, during which De Falco told Schettino to "get back on board for f**k's sake." Pepe called De Falco's tone degrading and said the commander was unprofessional and egotistic at a moment when he should have been a voice of calm.

Addressing the manslaughter charges, Pepe tried to bolster his argument that because no one died on impact when the ship slammed into the rocks, Schettino cannot be held liable.

Everyone who perished lost their lives as a result of the chaotic evacuation, he said.

Pepe defended Schettino's decision to delay the call to abandon ship by nearly an hour.

"Stop for a minute to consider what would have happened if he had abandoned ship 1 kilometer from shore," Pepe said. "There could be 4,500 dead, not 32." (There were 4,229 passengers and crew on the ship.)

He also suggested that finding Schettino not guilty would actually be good for Italy's image, somehow restoring it in the eyes of the world, which has seen this case as an example of Italian ineptitude.

But unless there's a successful appeal, Italy will never find out if that would be the case.