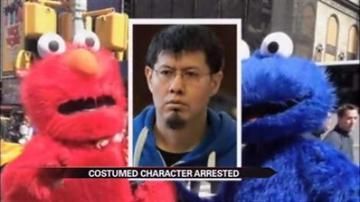 NEW YORK STATE -- He is known for teaching kids to share but a man playing a popular Sesame Street character is in trouble with the law.

A Connecticut woman says her son posed for a quick picture with a man dressed as the Cookie Monster in Times Square.

Her husband headed for an ATM to get cash for a tip but it seems he did not want to wait and wanted his money right then.

That is when the mom says he pushed her two-year-old and even cursed at him.

"Even when he's screaming and yelling at me, why are you doing this? I said I'm giving you money," said Parmita Kruada, mother.

The 33-year-old man is now facing several charges including endangering a child and aggressive begging.