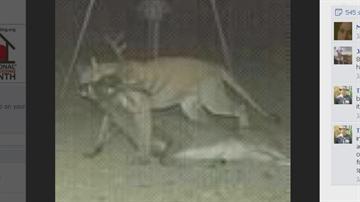 DOWAGIAC, Mich. – A photo of a cougar dragging a deer, supposedly taken by a motion sensing camera just north of Dowagiac, has been creating a buzz around the town for months. But, the Michigan Department of Natural Resources said it’s not what it appears to be.

“Cougar alert! Watch your animals, this was taken from a trail cam north of Dowagiac, it has been spotted at the corner of Dailey and Pine Lake!” reads the caption of the photo which has been shared over 500 times on Facebook.

Most residents around town knew about the picture.

“I’ve seen it lots of times,” explained Jason Keen, who has lived in Dowagiac all his life. “At local restaurants, Facebook, the internet.”

“I’ve got a buddy I work with that says he knows the guy, one of the guys, that took the picture and he’d seen the tracks,” Keen said. “Whether it’s true or not, I don’t know.”

According to the Michigan Department of Natural Resources (DNR) Keen was right to be skeptical. A spokesperson for the DNR said that he showed the photo to the department’s cougar expert after ABC57 sent him a copy. The expert apparently took one look at the photo and said it was taken in Texas. The picture is notorious for being posted on the internet across the country, falsely spreading rumors that cougars have been spotted.

“I’ve heard the same thing,” Jason Keen said. “You would think if it was from around here there’d be more evidence.”

Still, the picture has had folks across Cass County sharing their stories of spotting one of the big cats.

“I’ve heard of a lady that saw, supposedly, a cougar run up a telephone pole,” Keen described. “Rumors are definitely out and around.”

Cougars are originally native to Michigan, but according to the DNR they were thought to have been wiped out in the state at the turn of the century.

“We receive reports of sightings all the time,” explained Ed Golder, a spokesperson for the DNR. “Some bear out and some don’t.”

Most sightings originate in the Michigan’s Upper Peninsula, but the stories that have been swapped because of the photo posted on Facebook have people wondering if they could have made their way to Cass County.

Others agreed that the possibility exists, but there’s a lack of evidence.

The Michigan Department of Natural Resources website offers information about cougars and includes a link where sightings can be reported.