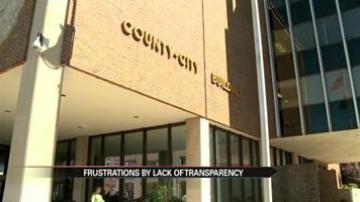 SOUTH BEND, Ind. -- ABC57 has covered the lack of transparency in decisions concerning the city of South Bend from something as big as an investigation into the police chief, to the budget, to the two way streets plan. One council member who is trying to get answers is being called a nuisance.

South Bend Common Council member Valerie Schey has been a voice in the quest for more transparency.

Some city employees have called her a nuisance for constantly submitting requests for information.

She argues she is being up front, asking straightforward questions and doing her job.

The issue is as simple as two way streets.

In the mayor's proposed 2014 budget, he's asking the council to appropriate $11.4 million to the Smart Streets program.

Schey wants that number broken down.

"I feel as a common council representative, it's my responsibility to ask detailed questions. If it's going to cost $11.4 million can you tell us how and why? And how and where that money will be spent?" said Schey.

It's a question still missing an answer.

Schey says it's just one example of the city's lack of transparency.

She says it's more than frustrating, it's keeping her from doing her job.

"Unless I have adequate information, I don't feel comfortable voting for things," said Schey.

She says she's done her research on the two way streets issue and found other cities, like Louisville, have done it $9 million cheaper.

She doesn't see how she can vote intelligently on an issue if the details are kept quiet.

"I'm trying to be very specific in my questions because I can't support a project if I don't know how the money is going to be spent," said Schey.

Schey says she thinks her constituents would support her on that.

She's still waiting for a response with the information she requested.

Schey thinks cooperation for answers to her requests increases around the time the mayor's budget is up for approval.

She says she and her fellow council members say it's like kids who behave better in the weeks leading up to Santa's arrival.

But for the rest of the year anything goes.