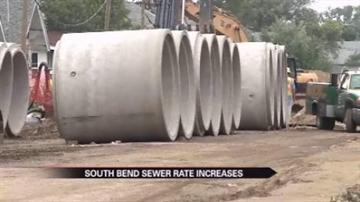 SOUTH BEND, Ind. -- Some members of South Bend's Common Council are fighting to keep city sewer rates from increasing again. It could be the 8th year South Bend residents have seen an increase in their sewer bill.

These issues are all tied to a major sewer project.

The EPA gave the city of South Bend an unfunded federal mandate to improve its sewer system.

Every year taxpayers shell out a little more for loans the city needs to pay for it, but that could change this year.

"In 2006 our residents were impacted with a 29 percent rate increase," said Common Council Member Valerie Schey.

"I want to make sure that we the council are working with the administration to look at absolutely every alternative to increasing our sewer rates," said Schey.

One of the ways that could be done is finding money that isn't being used in other parts of the city budget.

That's what previous Mayor Steve Luecke did to offset sewer rate increases a few years ago.

Will this administration do the same?

Then there's the $45 million in previous sewer bond proceeds.

"I think that we have enough to carry us through for a couple of years, and my thing is, it gives us the time to be able to make a better assessment than to rush a budget between now and October. I just don't think that's smart," said Davis.

The city has $45 million, but it will only take $20 million to do the work next year.

Why is the city considering a sewer increase?

"They say that we can get a better interest rate right now, and some other issues," said Davis.

The council members plan to meet with the city on Wednesday to continue discussions.