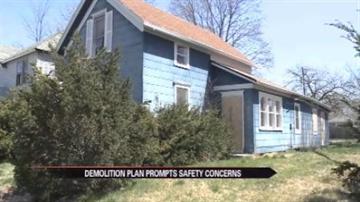 Members of the South Bend Common Council are concerned the city administration wants to cut corners in order to get the mayor’s 1000 homes in 1000 days project off the ground.

The council wants to make sure the program follows all of the state’s regulations.

"Are we meeting the Indiana Department of Environmental Management's standards with these demolitions? There have been some concerns raised that we might not be,” said Common Council Member Valarie Schey.

That's important because exposure to asbestos can cause cancer.

"We've heard that they're waiting to see what the regulations are, what legal liabilities that may be involved with this whole matter if we proceed without IDEM; and what would be a cost-benefit analysis,” said Oliver Davis, South Bend Common Council Member.

In other words, will it cost less to violate the regulations and pay a fine or to follow them?

The council would prefer the city follow the letter of the law.

"We certainly want to make sure while we are doing this that the health and public safety of our residents is protected and that each of these structures is being properly demolished,” said Schey.

"There are some reasons why those rules and regulations were set up by the state and federal guidelines. And let's not try to sparse them around, and get around them; and then later on have people's health be at risk because we were trying to be politically creative,” said Davis.

While some members of the Common Council want to get caught up in red tape, The City of South Bend is taking action when it comes to this serious issue that negatively impacts the fabric of our neighborhoods...The City has already been in communication with state and federal agencies and traditional demolition practices will continue to be done in an environmentally responsible way.