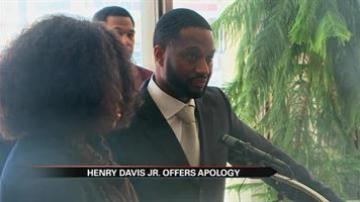 SOUTH BEND, Ind. -- South Bend District 2 Councilman Henry Davis Jr held a press conference and read a statement regarding the controversial Facebook post he made last week. He didn't answer any questions from the press in attendance.

During the press conference Davis repeated what he said last week. He said the post was intended to start a discussion.

"I address an unfortunate mistake regarding a blog and image post posted on my Facebook page," said Davis.

An unfortunate mistake that sparked 8 formal complaints at the city clerk's office and one police report.

Now Davis is asking for forgiveness.

"Although posted to my Facebook page, it is not an expression of my personal or political views. Many people have found it offensive. It was a mistake on my part and for that I am truly remorseful and I ask for your forgiveness," said Davis.

His pastor, Andre McGhee, says his job is to help the councilman focus on what's next.

"He's a great fellow, a great leader in the community, and while he's already admitted that he made an error in judgment, my job as his pastor was to help him apologize and seek redemption," said McGhee of the Greater Saint John Missionary Baptist Church.

"He doesn't listen to the constituents, only his little group. He wants this to go away. It's not going away," said Kaiser.

The Rules Committee will meet Wednesday at 5 p.m.

Council President Oliver Davis, Council Members Valerie Schey, Dr. Varner and Dr. Ferlic will decide if what Davis did was wrong and if so, punish him.

Until then, his supporters insist that this drama is punishment enough.

"And my view on Henry as to this day, even after this situation, is that he's still an upstanding young man. He responded in a way where he did not say he didn't do it, he apologized," said Lorraine Harper.

"We can barely get a police call over there in five minutes, let alone a leader who is still out here still trying to serve," said Komaneach Wheeler.

The Rules Commitee can dismiss the complaint or send the issue to the entire common council. Then they could issue a private or public censure, recommend Davis resign, or send it to the prosecutor's office.