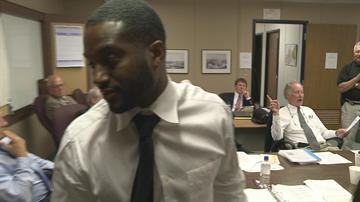 SOUTH BEND, Ind. – After Monday night’s meeting of the Board of Health and Public Safety (which included a series of heated arguments about efforts to curb the growing youth violence problem), ABC 57 decided to ask what could people expect city leaders to do about the problem if it seems they can’t even be in the same room?

“It was a double edged sword. If you don’t participate, you’re being an obstructionist and you’re advocating for violence,” explained Henry Davis.  “If you participate, then you’re sort of participating as a council member, which you could legally get in trouble for if something goes wrong by using your political office.”

Davis said he respected Phelps’s passion for stopping the youth violence problem, but pointed out that Phelps seemed to have rushed into demanding council members use their positions to help spur his movement without going through proper channels and also didn’t follow the strict rules of order governing council procedures when Phelps’s forcefully tried to express his views during the meeting.

Davis said he had also been frustrated by what he claimed to be Interim Chief Hurley’s lack of input on ideas to improve public safety.  He was also opposed to the idea that a new policy requiring cops to pull over at least one driver per shift as a way to show police presence and thus lower crime.

“That's going to be a negative impact,” Davis claimed.  “Now you're going to make people feel unsafe and uncomfortable from the people who are supposed to be serving and protecting us."

Davis also sounded off against current plans to use mentoring programs to help keep youth off the streets and out of trouble.

"If we continue to think going to a school one hour out of the week or two hours out of the week is going to make a huge impact or make a difference for that child we're fooling ourselves and we’re mistaken," Davis said.

Davis is South Bend’s Second District Councilmember; his district covers most of the West Side which is considered to be the hub of crime in the city.  His opinion is that more economic development and community involvement from the rest of South Bend will be key to stopping the problem of youth violence.

"The kids need to feel like they're being loved in this community, we don’t even have the opportunity to go to a swimming pool anymore outside but on the east side of South Bend,” Davis described.  “Everything that happens that has more of a community feel happens on the other side of Michigan Street and this is a result, the bias is a result of that."

Moving forward Davis said he would be more than willing to work with anyone interested in stopping the violence in South Bend as long as rules are followed, more options are considered and everyone is willing to share the burden of the work involved.